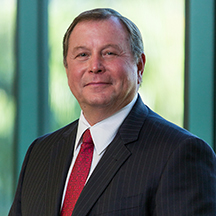 Florida Bar Board Certified in
Civil Trial and Business Litigation

Supreme Court of the United States

American Board of Trial Advocates

On June 12, 2009, Jeff was presented with The Donald E. Van Koughnet Lion of the Law Award for Professionalism by the Judiciary of Collier County, Florida.

Jeff, a Florida Bar Board-Certified Civil Trial (since 1995) and Business Litigation (since 1996) Specialist, heads our firm’s litigation group. He has, over the years, successfully represented clients in hundreds of substantial disputed matters involving commercial, wills/trusts and personal injury fields of law.

Prosecution and defense of banks for improper disbursements from customer accounts

Prosecution and defense of defamation claims

Prosecution and defense of nuisance and trespass claims

Prosecution and defense of fiduciaries

Prosecution and defense of claims for trademark and copyright infringement

Jury trial experience in a wide range of complex commercial matters, both as plaintiff’s and as defendant’s counsel. He has also handled numerous appeals, resulting in over 20 reported decisions in Florida, as well as reported appellate decisions in Missouri where he practiced law from 1980-1985

Certiorari review of land use decisions by local officials

Jeff has been a featured speaker for The Florida Bar Business Law Section’s “Business Litigation” CLE series. He is an editor for the Florida Bar practice manual, Real Property Litigation, as well as a contributing author thereto.

Successfully defended an ex-husband’s estate against a multi-million dollar claim by an ex-wife’s estate which was determined to be an unknown creditor. The probate court ruling was affirmed on appeal.

Successfully obtained removal of an estate fiduciary appointed to control the estate’s multi-million dollar manufacturing company asset for misfeasance, malfeasance and breach of fiduciary duty. The removal order was affirmed on appeal.

Successfully defended through appeal a personal representative of a substantial estate from removal on the grounds of alleged breaches of fiduciary duty and conflicts of interest.

Obtained summary judgment against a major national bank for improper disbursements from its customer’s account.

Succeeded in evicting a commercial tenant, and obtaining a substantial money judgment in a complex situation involving a landlord who was also a member of the business entity tenant.

Successfully recovered full employment benefits, plus attorneys’ fees, in a highly publicized dispute between the Superintendent of Schools and the Collier County School District.

Obtained final summary judgment of a hotly contested foreclosure involving over 4000 acres of land and a debt exceeding $50,000,000.

Obtained a substantial judgment for a subcontractor against a general contractor after an extensive trial, overcoming claims of fraudulent lien, “pay when paid” provisions, and defeating nearly $1,000,000 in claimed set-offs for delay and other damages.

Successfully obtained removal of a trustee from a multi-million dollar trust.

Successfully defended one of the nation’s largest producers of drywall against claims of product defect, by obtaining dismissal with prejudice of over twenty federal claims without the manufacturer having to pay any amounts to the claimants.

Defended one of the nation’s largest growers of tomatoes in a toxic tort case involving allegations of birth defects being caused by our client’s pesticide practices. The case involved scientists from around the nation, highly complex issues of scientific evidence, and dozens of lay and expert witnesses.

Obtained specific performance of a multi-million dollar contract to purchase land. After nearly two weeks of trial, involving hundreds of written exhibits and complex issues concerning the land use permitting process, Jeff not only obtained final judgment establishing our client’s right to purchase, he also defeated the seller’s counterclaim, and obtained an award of attorneys’ fees and expert costs which were deducted from the purchase price. Jeff successfully defended this final judgment on appeal.

Obtained a jury verdict in favor of a hotel company against architects for professional malpractice stemming from failures to identify requirements of the Americans with Disabilities Act in permit drawings.

Obtained a substantial judgment after a bench trial for a client in a claim against an estate emanating from the decedent’s breach of a prenuptial agreement.

Successfully defended through trial a client in a protracted quiet title action involving a boundary dispute.