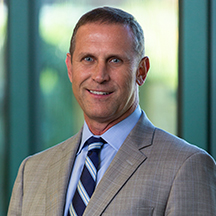 Association of Trial Lawyers of America

Keith Wickenden is a shareholder of the firm and has practiced law since 1991. He has an AV rating from Martindale-Hubbell and is listed in The Best Lawyers in America.  Keith has jury trial experience in a wide range of cases, both as plaintiff’s and defendant’s counsel.

Representation of individuals, financial institutions, contractors, professionals, and corporations in a variety of litigation matters before federal and state courts at the trial and appellate level.